← The Importance of Sports Bras Interval Training - How to get Started →

Recovering from a slow start

How to make up for lost time

At the start of any mass participation running race, such as the London Marathon, Great North Run or the Bupa 10k, it can be incredibly hard to find space on the road for the first mile or two to get into your stride and run at your planned pace.

With so many people on the road ahead of you, it’s easy to get in a mild panic that you’ll never hit your splits for the first few miles and worry that you’ll lose time and miss out on the chance of getting a PB.

The first thing is not to panic!

Unless you’re a celebrity or incredibly lucky and find yourself starting at the front, you’re going to have to accept the fact that there are going to be several hundred other runners ahead of you - many of whom may well have lied about their anticipated finishing time and will be running far slower than you.

This is simply the reality of mass participation events and there’s sadly nothing you can do about it – or is there!?

Although you may not be able to do anything about the hundreds of runners in your way, there are several tips and tricks you can adopt to increase your chances of developing a good running rhythm early on, to help you settle down into your planned splits.

1. Move to the side of the road

By moving to the side of the road, not only will you find that there is often a little more space for you to run, but more importantly, you are only going to have to be wary of people on one side of you.

You’ll of course always have people in front or behind you, but by reducing the numbers of fellow runners on your left or right shoulder, you reduce the risk of collisions, which will help you to settle down and get into a rhythm.

Settling into a running rhythm early on in the race is essential. It not only helps to calm you down and settle the nerves but a good rhythm can also help to conserve energy and prevent you from fatiguing prematurely in the latter stages of the race. 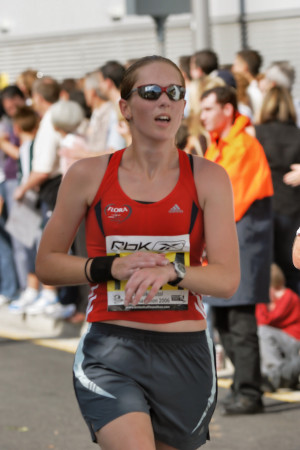 No matter where you are amongst the hordes of runners waiting to start the race, it is your chip time which will determine your individual race time - NOT the time which starts when the gun goes bang.

So, if you find yourself several hundred metres back and sandwiched in between a few runners dressed up as Superheroes, Rhino’s or other marathon adept zoo animals, don’t panic.

Take your time to settle down and if necessary weave slowly in-between runners to find some space to settle into a steady pace before you’ve reached the start line.

Throughout your training, if you’ve been doing it right, the chances are that you would have spent the last few months running in one direction – forwards. That is how your body is programmed and that is the direction that your legs are conditioned to run. Sounds obvious!

The trouble is, when faced with the prospect of getting past several hundred other runners to find some open road to settle down in, logic can go out of the window and you can find yourself sidestepping people like a rugby player for best part of a mile. By sidestepping and moving in patterns that your body is not used to or trained for, you recruit different muscles at different intensities,causing your heart rate to shoot up and unconditioned muscles to become quickly fatigued.

This may not feel like an issue at the time, but trust me, come the latter stages of the race, all that sidestepping would have used up valuable energy which you wished you hadn’t wasted.

So, by all means weave in and out of fellow runners who are running slower than you but do it very gently and calmly – save those extra hearts beats and muscles for the tough miles ahead. 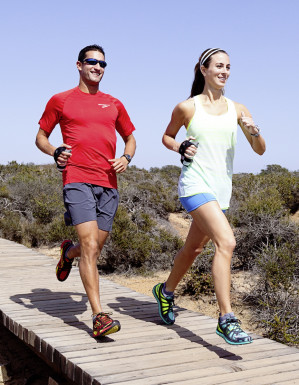 Despite svelte sidestepping and a good road position, there’s of course still a chance that you’ll still be surrounded by hundreds of other runners and your chances of hitting the first mile on split might look doubtful. Frustration may be your first emotion but…..Don’t panic!

The key is to accept that you’re in this (minor) predicament but understand that it’s far from a PB ending problem. In fact, it may well be the best thing that could happen.

Overexcitement and an adrenaline rush at the beginning of a race often mean runners cover the first few miles way to fast and deplete energy early on in the race, meaning that premature fatigue later on will almost certainly mean little chance of a PB. By being forced to take the first few miles slowly, the risk of running too fast is taken away from you, meaning that you can conserve energy and make up time over the remainder of the race.

So how do you make up time after a slow first few miles? SLOWLY is the key.

For example, if you are aiming for a 4 hour marathon and you had planned to run each mile in 9:09 min/mile, then there’s a chance that you could find yourself running the first two miles at a 10:00 min/mile pace – a deficit of 1min 42 seconds. You’ve got 24 miles to make this time up, so stay calm and adopt the following strategy.

Although the initial temptation maybe be to make up that lost time straight away, it’s vital that you take it easy and chip away by only 5-10 seconds a mile (maximum) at a time, rather than run your first mile in open, “traffic free” road at an excessively quick time. This will only deplete your energy sources and ruin any chance you have of having anything left in your legs come mile 18 onwards.

Slowly does it. The slower the better! 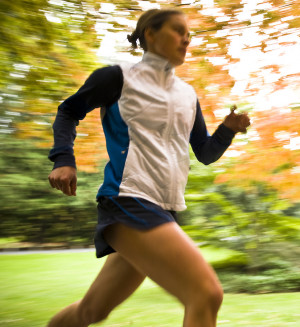 5. Prepare for the worst, hope for the best

Ask anyone who has run in a mass participation 10k, half marathon or marathon whether their race went 100% according to plan and I guarantee that the overwhelming majority of them will say no.

There are so many little things that can go wrong, or not work out quite as you had planned all of which have the potential of jeopardising your hopes of a PB.

Mentally preparing for mishaps and the possible situations outlined above, will help you get into a positive frame of mind and ensure you are ready to handle any circumstances that are out of your immediate control.

At the end of the day - that’s racing. Some days are good and some days are bad - but there’s ALWAYS next time.

Have you got any tips for clawing back your splits during a 10k, half marathon or marathon? If so, please leave a comment below. 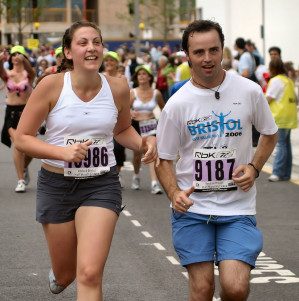